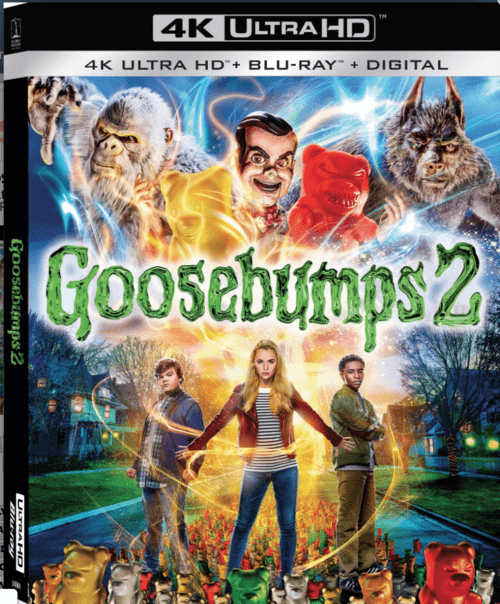 4k movies reviews
Writer Robert Stein is a cult personality in his own way. In the US, he is considered someone like Stephen King in a youth thriller genre, and his books are sold in millions of copies all over the world. In our country, R. L. Stein was quite popular in the 90s and early 2000s, when the publishing house "Rosmen" began the release of his cult series for young people, "Horror". You may also remember thin books with catchy eerie covers and coarse names like “Smile and die”, “Scarecrow walks at midnight”, etc. For a huge number of children, the history of Stein became the beginning of a great love for books and the horror genre in particular.

For his format, Stein's books, surprisingly, were lucky with screen versions. In 1995, Fox Kids began the anthology series “Goosebumps”, which brought many book stories to the screen. The series was quite popular, lasted 4 seasons, which included the 74 series, but over time the ratings fell, and the series covered. And after almost 20 years, Stein's heroes returned to the screens in a full-length film format, directed by Rob Letterman, and Sony at the helm of the production process. Sonic immediately abandoned the concept of transferring a single story to the cinema format, deciding to make the film a kind of mystical skit for the characters of Robert Stein’s books. Fans of the author, of course, found among the colorful evil werewolf from “The Werewolf from the Swamps”, the Yeti from “The Snowman's Nightmare” and the famous Slappi, a living doll that became the hero of several stories of Stein. The film was favorably received by viewers of all ages, and the work on the sequel was not long in coming.

"Goosebumps 2: Haunted Halloween 4K" put the winner of the "Oscar-2007" for the best short feature film Eri Sandel. In continuation, the viewer finds himself in another small American town on the eve of Halloween, where a company of children discovers Robert Stein’s manuscript, which should not have been read. Not knowing about the terrible consequences of writing, Sonny (Jeremy Ray Taylor), Sam (Kalil Harris) and Sarah (Madison Eysman) release the mischievous trickster Slappi doll, whose only desire is to sow panic and chaos in the world. Endowed with unimaginable power to animate the inanimate, Slappi calls into the world all the evil from the very first unpublished novel of his author. And the children will have to make every effort so that this Halloween does not become the last for them.

“Restless Halloween” came out just when this very holiday is celebrated in the Western world, and perhaps this is the perfect option to go to the movies with the whole family. The genre of teenage horror today seems to be getting a second life and it is truly fascinating to watch Hollywood trying to walk the fine line between genres. After all, children - the audience is not easy, just overdo it with suspense - and you will receive accusations of causing moral harm to minors. Therefore, films that are trying to scare a child, usually immediately seek to entertain him. In this regard, the "Uzhastikov" full order. Despite the whole galaxy of creepy monsters, few of whom they can really scare, despite the fact that Sandel has more horrible scenes than in the original Letterman movie. And the main antagonist of both parts - Slappi's puppet - is perceived not as the personification of evil, but as a clever trick, for which damage to the city and people is only a prank in especially large sizes, accompanying his eternal revenge on his creator. This motif of the rebellious offspring is subtly played up by Sandel in comparison with another monstrous rebel - Frankenstein.

But a charismatic villain is only half the battle. Heroes play an important role in any story. Young actors who have embodied Sonny, Sam and Sarah on the screen have already had experience in films of a similar genre. For example, Madison Aysman we saw not so long ago in the sequel “Jumanji”, and Sonny played Ben in the super-popular “Ono”. The guys are harmonious in the frame and quite charming, and they are perfectly complemented by more experienced actors like comedy star Ken Geong as the hyperactive neighbor Sonny and Sarah and Wendy McLendon-Covey, who played the mother of the main characters. He looked at the light and Jack Black, although this time his participation in the Halloween conflict is very conditional and is rather reduced to a bold hint of the story of Trikvel, which, no doubt, will take place in a couple of years.

The attentive viewer and admirer of Stein's books "Restless Halloween" suggests to find familiar monsters again, and for those who are not familiar with books - to find all references, Easter eggs and funny cameo paintings in the horror genre. They are generously scattered throughout the film and extremely ingeniously inscribed in the plot. Not without its comic "jokes" addressed to the King of Horrors. And if you look very carefully, you can even see the real R. L. Stein and compare how much Jack Black’s image resembles the original.

“Goosebumps 2: Haunted Halloween 4K” is a great family entertainment for everyone.