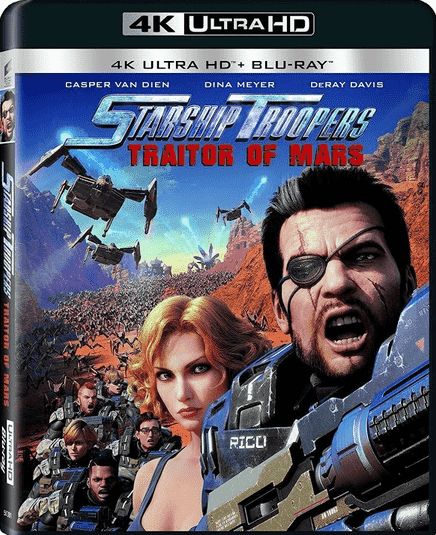 Starship Troopers: Traitor of Mars 4K Review
I generally watch the Starship Troopers CG movies looking for ridiculously over-the-top action shlock I can put on with friends and laugh at while being entertained. Traitor of Mars does the trick on this front, but it actually has a pretty good story this time with a cast of lovable shlubs. Whoever came up with the concept of a makeup-caked bimbo Space Marine is exactly the kind of person who should be leading the charge on these Starship Trooler CG flicks.

These sequels are, as you might expect, nowhere remotely close to the verhoeven classic in terms of tone or message, but they surprisingly do a pretty great job of keeping up that same dumb fun 90's shlock feel that the surface level of first flick had: troopers are sent into the meat grinder time and again by incompetent superiors who are wholly detached from the reality of war. The difference is that, in these CG flicks, Rico will get launched 15 feet into the air, do a flip and jump-kick a giant bug to kill it, and it'll totally work. Everyone has anime plot armor and every dumb tactical decision can be fought through by shooting enough bullets at it.

In short, it's close enough to the surface level of the original to keep true, while also being wholly enjoyable shlock to watch with friends. Thought they did a good job with this one.