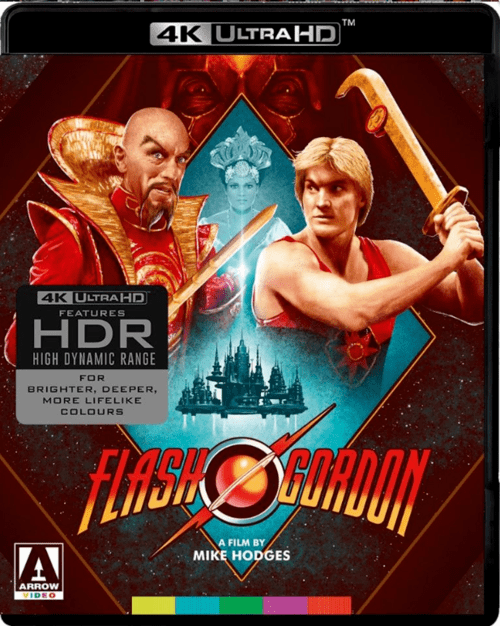 The planet is ruled by Emperor Ming the Ruthless and his daughter, the evil beauty Aura. The heroes have only one opportunity to save Earth - to destroy Ming, uniting the princes of this distant planet who are at war with each other...

4k movies reviews
You put aside Camus' book, watched all Antonioni's films, and your conversations with your friends became so intellectual that passers-by, having heard an excerpt of your friendly conversation, fall into a short-term coma? Are you so stuffed with all kinds of intellectual products that you got glasses (and it doesn't matter if you have bad eyesight or not)? Are you tired of all this, but do not know what to do? Flash - aaah - will save you from all kinds of thinking activity!

And Flash Gordon is not even a superhero, but just a football player (I will clarify that he is an American football player, not something that was invented by the British, and is the subject of their national pride). He has no superpowers, all sorts of tricks, the highest intellect and wit. All he has is his blonde hair, his ability to play football and his big good heart. And this guy is the savior of the earth. Well, isn't that cute? Without all the pathos and pretentious intelligence and excessive moralizing, he saved the Earth. You don't see that in today's blockbusters. That's what this movie has in it.

Yes, with its gloomy naivety and stupidity. Imagine there's a little boy in front of you who you want to slap on your cheeks with a sentence: Look at this silly and funny little boy here. Hold a candy. The logic in this film is exactly as long as it takes to push a locomotive action on the rails of the story, preventing it from moving off the rails and disaster. No more, no less. The purpose of the film is to entertain, and that's what it does. And the absence of long philosophical conversations and protracted internal torments of heroes gives dynamics to a plot and protects from boredom which necessarily appears when with clever kinds speak nonsense.

Actors, and among them there are such stars as Ornella Mutti, Timothy Dalton and even Max von Sudov in the role of villain Emperor Ming, understand that a deep and penetrating acting game only spoil the film, so do not zealously. But, even this fact is in the film's favor. The viewer has a friendly understanding of the actors. Yes, I understand that this is not the place of an acting workshop, but I am not waiting for it, do not worry, friend, just play for your pleasure.

The film is made in the genre of fiction, and one of the main tasks of this genre - to impress the audience with something unknown and unusual. And with this task cope costumers, shaken the closet of his imagination, and shaken from there a lot of bright and unusual costumes. Colorful scenery and special effects successfully create a fantastic world in which the main characters get. And let the current viewer at a glance notice the cardboard scenery and unnatural special effects, but it says only that sometimes it is useful not to look closely. Cosmic also adds and the music of the British band Queen (they even performed the wedding march).

Well, Flash Gordon saved you from another bizarre evening. What are you saying? Is he some kind of stupid and naive? Yeah, but Flash is a good guy, simple, straightforward and honest. I like him.