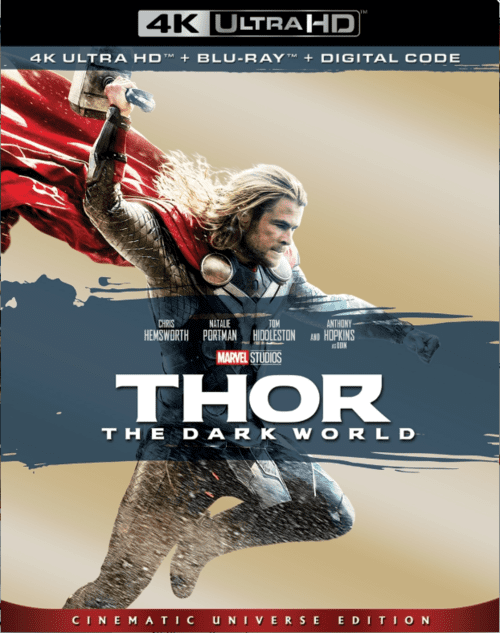 USA Movies / Adventure 4K
Producer: Alan Taylor
Cast:Chris Hemsworth, Natalie Portman, Tom Hiddleston, Anthony Hopkins, Christopher Eccleston, Jaimie Alexander, Zachary Levi, Ray Stevenson, Tadanobu Asano, Idris Elba, Rene Russo, Adewale Akinnuoye-Agbaje, Kat Dennings, Stellan Skarsg?rd, Alice Krige.
IMDB 6.9
File Size 50.59 GB
Film description
Taken from IMDB.COM
The second part of the amazing film from the Marvel Studio. 4k material download Thor The Dark World, become premium users and save our site. The mighty Thor will again have to fight for the restoration of order in the galaxy, meeting face to face with the ancient alien race, led by the villain Malekith, who longs to establish the power of darkness in nine worlds. Faced with an enemy more powerful than Odin himself and the whole army of Asgard, Thor must gather strength for a decisive battle. A dangerous journey awaits him and a long-awaited meeting with his earthly lover Jane Foster. Can Thor risk the dearest ones to prevent darkness from reigning in the vastness of the universe?

4k movies reviews
It seems that the battle for New York just died down, and part-time for saving the Earth, the defenders and superheroes each went their own ways, promising to write letters and send postcards ... But the Forces of Evil had no time for rest, they again woke up from a thousand-year dream with the intention … what a surprise! yes, enslave the universe.

Jane Foster is trying to live a normal life, go on dates and not think about any Scandinavian gods. Thor puts things in order in all 9 worlds, simultaneously trying to convince parents how lucky they are with a mortal daughter-in-law. Locke languishes in the dungeon (although, more precisely, it would be to say “luminary” - a spacious white room with all conveniences, but a golden openwork wall) It seems to be all in business, but now it doesn’t sit in place to worlds that are lined up in some cunning way , awaken from sleep the very Forces of Evil.

I remember that the first “Thor” I did not particularly like, or rather, did not make at least some definite impression. Just another high-budget Hollywood movie with famous actors and spectacular special effects. But the Avengers that came next turned out to be a completely different story. It seems to be the same, but at a higher level. More heroes, good and different, more cool locations, more large-scale showdowns. I don’t know whether the quantity has grown into quality, or whether something special was present in Avengers, but the film purely entertained brought some share of drama, which does not cancel its main function, but adds depth inaccessible before.

“Thor 2” in this sense is closer to the “Avengers” than to its first part. Many beautiful species of different worlds - Asgard, of course, most of all, but the Earth is not too far behind. A lot of light humor, and from different characters. Many great battle scenes, mesmerizing in strength and scope. In general, a lot. You definitely won’t be bored.

You perceive the heroes of “Torah 2” as old acquaintances. Thor himself is powerful and brutal (sometimes even beyond measure), Jane is smart and independent, the professor is brilliant to the point of madness. But striking, stunning and blinding, no doubt, Loki. Oh this charming bastard with a beaming smile that you don’t know - whether to kill or to be touched! The only character that cannot be attributed to either friends or enemies, the only unpredictable element. In my opinion, it is the character of Tom Hiddleston that competes with Chris Hemsworth, and at times blocks him.

“Tor 2” is, of course, an entertaining film, but nevertheless the motives of fidelity, trust and willingness of self-sacrifice (albeit illusory) are also loudly heard in it) And a delicately balanced balance between eternal concepts and a slight laugh does not allow you to record a film pathos dummies, nor to cheap one-day ones.

A good film, and spectacular and meaningless.