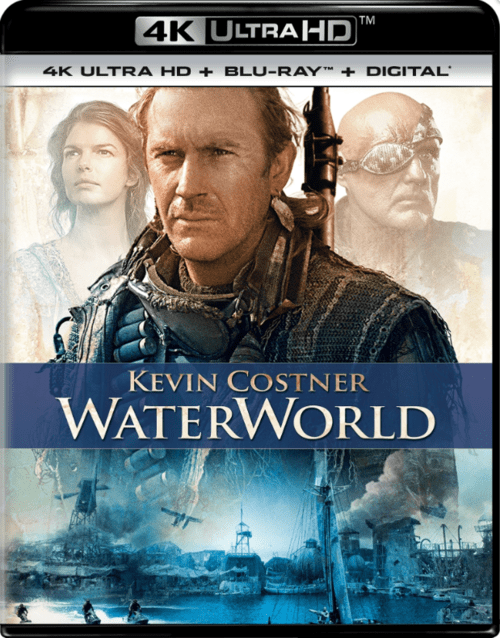 "Smokers" kill, rob, turn into slavery - use internal combustion engines. All the rest are trying to survive, who as they can, and Kevin Costner is floating on its own fantastic boat, but one thing unites them all - they are all looking for an island.

In one of the colonies live a very beautiful woman and a girl with a tattoo on her back. And this tattoo is part of the map on which this island is indicated. Naturally, the “smokers” hunt for her ...

4k movies reviews
It is a pity that I looked at such classics just now.

The film shows a dark distant future after the apocalypse. The ice melted, turning the Earth into a large ocean. The remaining handful of people trying to survive in this difficult time. It is clear that such conditions are attractive for people who love traveling and adventures. The protagonist is one of those - this is a lonely wanderer that plows the ocean, about which virtually nothing is known.

The picture for its time (1995) has a huge budget - 175 million dollars. Despite the fact that he failed at the box office and collected only a little more than the amount spent on him (265 million), this is no reason to throw the film into the dustbin of history, especially since almost two decades have passed since its release. What do we have?

And we have an interesting, though not quite original story, which is fun and interesting to watch until the very end. The battle scenes here are gorgeous, they literally take your breath away with their realism, logic and forethought. The life of the surviving people is shown just as well - this is, first of all, the merit of those people who worked on the scenery and appearance of the survivors. In short, when you look at it, you believe that it is really hard for them. Well, not to mention the beauty and scale of the film. Filmed, in truth, beautiful, especially for its time. Writing a lot about acting is not much point - it’s just good. Especially good is Kevin Costner, who portrayed a brutal and silent adventurer.

So, before us is absolutely undeservedly forgotten sea blockbuster. He is big, noisy, funny, senseless and merciless. Lovers of films of the 90s, lovers of adventure, as well as "survivors" - be sure to watch.