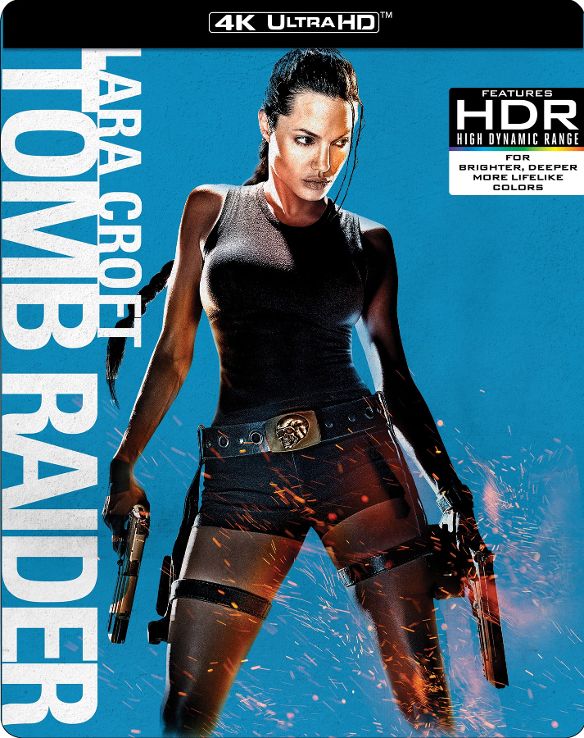 Story Movie
A member of a rich British aristocratic family, Lara Croft is a "tomb raider" who enjoys collecting ancient artifacts from ruins of temples, cities, etc. worldwide, and doesn't mind going through death-defying dangers to get them. She is skilled in hand-to-hand combat, weapons training, and foreign languages - and does them all in tight outfits. Well, the planets of the solar system are going into planetary alignment (Which occurs every 5,000 years), and a secret society called the Illuminati is seeking an ancient talisman that gives its possessor the ability to control time. However, they need a certain clock/key to help them in their search, and they have to find the talisman in one week or wait until the next planetary alignment to find it again. Lara happens to find that key hidden in a wall of her mansion. The Illuminati steal it, and Lara gets an old letter from her deceased father telling her about the society's agenda (Her father was also the one who hid the key). Now, she ...

Lara Croft Tomb Raider 4K Review
"Tomb Raider" is a harmless diversion that should please its core audience. I loved the performance of Angelina Jolie, who brings the computer game heroine Lara Croft to life. I watched an interview with Jolie in which she said that she really "became Lara Croft".

With her mock British accent, Jolie is a lot of fun as the adventurer-archaeologist who is equal parts Bruce Wayne and Indiana Jones, but with a much better body.

Taking its cue from the video game, the film's screenplay is more of a puzzle than a plot. The script is a patchwork of ideas that plays like a Greatest Hits collection of other films. It deals with end of the world stuff, but it never feels apocalyptic. It's controlled chaos, utterly lacking in surprise. The script jumps from one expected moment to the next, never apologizing for its lack of originality.

At least Jolie understands the limitations of the script. There's enough conviction in her performance to make you want to believe in Lara Croft, the spunky heiress is who is equally at home in her spacious mansion or within the catacombs of a lost tomb. She's guided by the spirit (both literally and figuratively) of her late adventurer father, Lord Croft (Jon Voight), and assisted by an archaeologist Alex West (Daniel Craig) and cyber-geek creator Bryce (Noah Taylor).

The film opens like "Raiders of the Lost Ark," with Lara Croft deep inside one of those musty, dusty tombs. Instead of outrunning a giant boulder, Croft squares off against a mechanical monster, a robotic menace that seems to come out of nowhere. It doesn't. We learn that it's a creation of Bryce, used to keep Croft on her toes.

Angelina Jolie made the perfect Lara Croft; her facial expressions and sly smirks added a personality to the flick that I can only imagine the video game is missing. She seemed smart, brave, and composed as well as full of emotion. Okay, maybe the parts with her father (real-life papa Jon Voight) were a little over the top, but since the whole movie is just eye-candy anyway they seemed to fit.

The fight scenes among ruins got me. How can you not love Lara Croft jumping onto a swinging obelisk to smash a glass eye that holds the key to time, or sledding thru an ice cave being pulled by dogs? Or the scene where the villains jump through her castle windows as she rappels around the walls, smashing chandeliers and pistol-whipping bad guys? What's a girl to do but hop on her motorbike, take a guy out sideways, and race off at 100 miles an hour? Excellent.