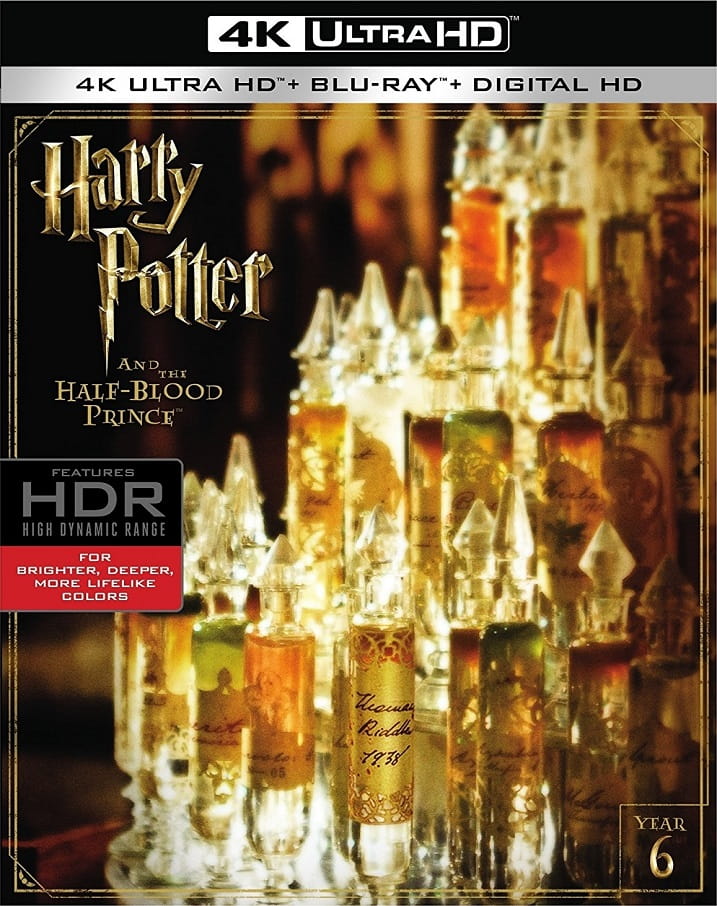 User Review 4K
The binding is really fragile Harry Potter and the Half-Blood Prince
It's a real shame that I could never give a film featuring Harry Potter the status of a perfect film. Each tale relies so heavily on those that came before or after that one can never be a truly all-encompassing work. Sure, the three-act structure can be utilized, but without the background info, nor the knowledge that more will be coming, watching a middle installment alone will leave you confused and disorientated. The reason I bring this up is the fact that Harry Potter and the Half-Blood Prince is good enough to warrant the praise and to put the idea in my head about whether to call it a masterpiece. The tone is perfect, the laughs are many, the darkness is charcoal black how could this be the same director as the abysmal in comparison to the rest of the series Order of the Phoenix, David Yates? Two words Bruno Delbonnel.

Who is Delbonnel you may ask? Well, he is the brilliant cinematographer behind the camera. I may have blamed the failures of the fifth film on its screenplay as Steve Kloves was glaringly absent, (he being the writer of each other film, including this new one), but a film is a team effort. Therefore I guess maybe I shouldn't put all the accolades on one man now; I just feel absolutely compelled to do so because so many moments linger in my mind due to the beauty of their composition and use of their environments to stay interesting and exciting at all times. Visually, you cannot be bored. It just goes to show that it is never the director alone, but also the team he or she brings along. I like Yates and was surprised at how much I disliked his first foray in the Potter universe, granted, I felt the book itself was sub-par at best. Thankfully, he did not disappoint with his second of three, (make that four as book seven goes to a two-part finale), because, as it was with the novels, Half-Blood Prince is by far the best of the series until Deathly Hallows of course. And adding the pedigree of a guy like Delbonnel, with films such as Across the Universe, A Very Long Engagement, and Amelie in his back pocket all stunning works of art only makes his job easier.

I can't get over the use of close-ups throughout, or the multiple instances of framing used to hide something on screen. Oftentimes, the camera pans or cuts to reveal something in the fringes, to highlight the focal point when it's not centrally located, or literally move our eyes to exactly where the filmmakers want them to be. The blocking is superb with some scenes blurring the edges and keeping only our main object of interest in focus, timing and positioning executed with aplomb. And did I mention the close-ups? (Yes, I know I did.) One sequence, with Harry and Ginny running through a field of tall grass after intruding Death Eaters, is shot with a high speed pan to keep the characters crisp as the foliage darts and blurs in their wake. I'd be remiss not to mention the special effects as well, especially when dealing with the black smoke trails from Voldemort's flying goons as well as the wispy pensieve. Whether completely computer generated or practical dye clouds in water, the effect is pitch perfect, even dissolving each memory in sections, leaving important pieces, like young Tom Riddle, to be lingered on just a second longer than the rest.

As for the leads, Daniel Radcliffe and Emma Watson are solid as usual, (Radcliffe showing some solid comedic chops after taking luck elixir), and Rupert Grint's Ron Weasley gets some room to break free. But it is the supporting roles that deserve notice. Helena Bonham Carter will scare children, so kudos to her, and Michael Gambon's Dumbledore will win even more hearts as his leader finally allows Potter into the inner circle of the plan to rid the world of Voldemort, it now being a circle of two. It is newcomer Jim Broadbent, however, as Professor Slughorn who steals the show. Broadbent is known for his many comical expressions and his rubber face is utilized to great effect here. A blowhard and man with many "friends", his jubilant smile and need to collect powerful and famous wizards for his Slug Club are ever-present, bringing some levity as well as effectively hiding the dark secret that lies beneath.

Harry Potter and the Half-Blood Prince succeeds in the details. It is an exercise in minimalism and showing only what is necessary to the plot. Condensing the novel better than ever done before, Kloves has given Yates the tools to make a film and not just a visual representation of the words. What had previously been done best by Azkaban's Alfonso Cuaron, this one works better at retaining more subplots and not stripping it quite so bare. Subtle hints are planted so no longwinded exposition is needed to make us, as an audience, feel stupid and lectured to. Instead Yates and crew allow us to show our intelligence and ability to use our eyes and memories to piece things together, making the experience more enjoyable as we believe we are solving the mysteries and not the director who is skillfully guiding us through. I'd say it couldn't get better than this, but my confidence in Yates has been renewed and my hopes that Deathly Hallows is treated with respect is at one hundred percent, so who knows what the future has to offer?
On the site almost the entire collection of Harry Potter in 4k, look and download:
Harry Potter and the Sorcerer's Stone 2001
Harry Potter and the Chamber of Secrets 2002
Harry Potter and the Goblet of Fire 2005