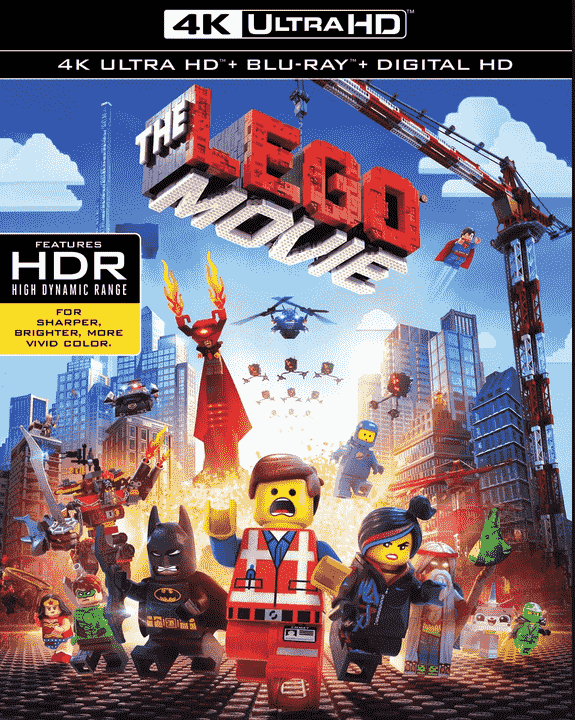 The LEGO Movie 2014 Review 4k
Like many of you, the first time I saw the trailer for The Lego Movie (2014) I thought to myself, "Are you kidding me?!" Yet another movie based on a franchise of toys aimed towards families willing to cough up the cash just to shut their kids up. Can't we for once make movies for kids that don't dull the senses? Have we truly come to the point where there are no original thoughts? Yet after seeing not just families but college kids' line up to see sold out viewings I became interested. In addition, The Lego Movie managed to muster a staggering 93% on rottentomatoes.com, an unheard of fresh score in the February film graveyard. In short; curiosity got the best of me.

Boy was I wrong about this film. I honestly couldn't have been more wrong about a film in my life. The Lego Movie is not only the must see film of the late winter season, I'm going to go ahead and call it now; it's the best family-oriented film for all ages of 2014. Okay maybe not but at the very least it's a very high bar to set.

The story busts out of the gate from the get-go; Vitruvius (Morgan Freeman) a wizard and "master builder", while protecting a mystery weapon is blinded by Lord Business (Will Ferrell), obviously our caped and big booted villain. Before Vitruvius is kicked into the abyss by Business and his robotic minions, he foretells of a hero, the "special" who will put an end to his dastardly plans, whatever they might be. The next morning Emmet a seemingly ordinary Lego construction worker goes about his normal day. He comes across a woman named Wyldstyle (Elizabeth Banks) searching for "the piece of resistance" which he unwittingly finds and becomes beholden to. Now it's up to Emmet and some newfound friends to fulfill the prophecy.

It all sounds like a scenario dreamed up by a child who's read one too many comic books. Yet within The Lego Movie's brick-blocked world, everything including the story feels incredibly new and original. Children, especially the young will enjoy the fast action, laugh-a-minute jokes, sly slapstick and goofy characters. Obvious kid favorites will include perma-smiled Unikitty (Alison Brie) and zany 80's throwback astronaut Benny (Charlie Day) whose ability to create spaceships is frustratingly overlooked. Plus there's Batman (Will Arnett) Batman!

The older crowd however will be astounded not only with the seamless CGI effects but with the subversive element throughout the film. Yes a goofy, kiddy film of such unrestrained chirpiness can be positively incendiary, at least in this case. Throughout the film there are Orwellian elements tucked underneath crafty pop-culture references ranging from Star Wars (1977) to Harry Potter. There are mischievous pokes at what Henry David Thoreau referred to as "(leading) lives of quite desperation."

Finally there's cheeky satire aimed at the Danish toy brand itself. Much of the conflict revolves around "master builders" who build whatever they want out of the parts they find versus Lord Business who wants everything built "according to the directions." This particular theme struck the kid inside me as I was very fond of Legos. Younglings may not realize that back in the day, pre-designed Lego play sets took a back seat to the now impossible to find Lego Creative Bucket sets. To the uninitiated that particular red bucket set was an amalgam of potential foot sores but to this writer, those 200+ pieces were a gateway to an unlimited creative space.
The LEGO Batman Movie 2017 4K UHD accurately and effectively recreates that creative space through accessible movie magic. It exhibits a fun hero story that may not be treading new narrative ground but nonetheless feels fresh and new. Finally the themes and occasionally biting humor makes The Lego Movie a kid's film that isn't just for kids but the child in all of us. This February do yourself a favor and treat yourself to an adventure story unlike any other. Then go home and order some Legos online! I know I am.