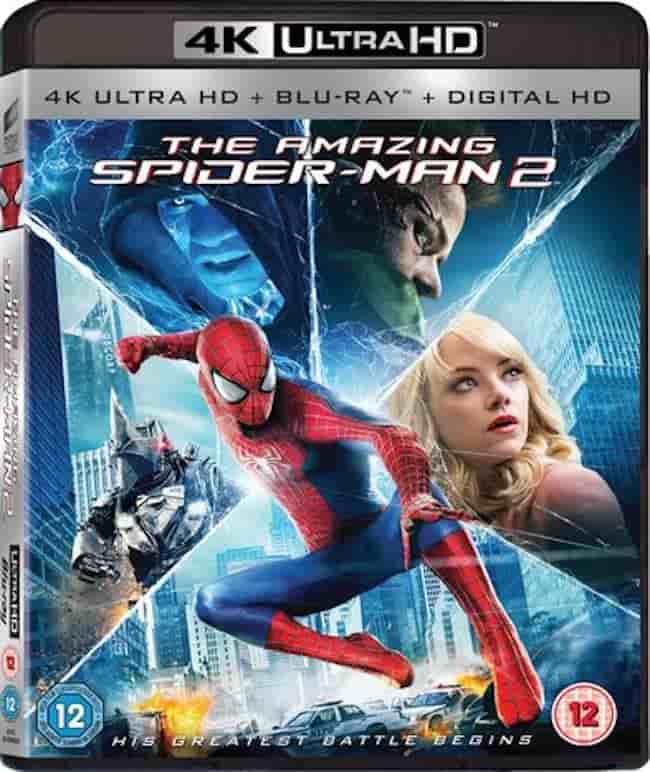 USA Movies / Adventure 4K
Producer: Marc Webb
Cast:Andrew Garfield , Emma Stone , Jamie Foxx , Dane DeHaan , Colm Feore , Felicity Jones , Paul Giamatti , Sally Field , Embeth Davidtz , Campbell Scott , Marton Csokas , Louis Cancelmi , Max Charles , B.J. Novak , Sarah Gadon
IMDB 6.7
File Size 60.6 GB
Film description
Taken from IMDB.COM
Peter Parker under the guise of Spider-Man is still saving the world from villains and criminals, and spends his free time with his beloved Gwen, but the school time is drawing to a close, and ahead of the heroes awaits adult life. Peter remembers that he gave his father Gwen the word for ever to leave the girl's life, thereby no longer exposing her danger. However, keeping this promise is not so simple. The fate is preparing Peter surprises: on his way will be a new opponent - Electro, and he will be destined to meet again with longtime friend Harry Osborne and learn a lot about the past of his family.

Storyline
We've always known that Spider-Man's most important conflict has been within himself: the struggle between the ordinary obligations of Peter Parker and the extraordinary responsibilities of Spider-Man. But in The Amazing Spider-Man 2, Peter Parker finds that his greatest battle is about to begin. It's great to be Spider-Man. For Peter Parker, there's no feeling quite like swinging between skyscrapers, embracing being the hero, and spending time with Gwen. But being Spider-Man comes at a price: only Spider-Man can protect his fellow New Yorkers from the formidable villains that threaten the city. With the emergence of Electro, Peter must confront a foe far more powerful than he. And as his old friend, Harry Osborn, returns, Peter comes to realize that all of his enemies have one thing in common: Oscorp. Written by Sony Pictures Entertainment

The Amazing Spider-Man 2 Review
I wanted to see this movie more than any other for 2014. I got my hopes up and was very excited and then the day came to see it with my girlfriend and I LOVED IT! For me, it had great humor, great acting (especially Andrew Garfield) and a great story. Many disagree though but to be honest I think it mostly gets bad reviews and ratings because it's not a depressing movie that is 100% realistic with a lot of swearing like most of the other TV shows and movies that get the highest ratings. Not much of a chance is given for these fantasy films anymore but they have always been my favorite movies and if I ever do get to make movies when I'm older, you can bet they will be funny, imaginative, action packed and completely awesome for all ages! The Amazing Spider-Man 2 for me is one of those movies.
The Amazing Spider-Man 2 Ultra HD 4K REMUX.
Now, of course I don't think that a movie can be 100% perfect. There are some things I don't like about this film such as how different it was put together compared to the first movie. I personally don't like a sequel with so many changes. It feels like we have to adjust to a new environment too much so we can't continue the story we started. I am surprised it was this different even though it had the same director but the music composer was different, the credits were edited differently, the costume was better but still different. The two new Star Trek movies are examples of two movies that are set up the same way and can tell the story we came to see and that's one of the reason I love them both. The two Johnny English films are examples of two movies that are set up so differently as if the sequel just forgot the first movie. I personally can't continue following a story so well when it's sequel is set up so differently compared to the first.

I also didn't care much for the way some parts of The Amazing Spider-Man 2 remux bluray were set up. I believe some parts of the movie could have been in different places but it wasn't much of a problem for me.

Overall, this movie made me smile, laugh and cry. It is the exact kind of movie I can watch again and again and enjoy and I walked out of the cinema on the 17th of April 2014 and smiling.