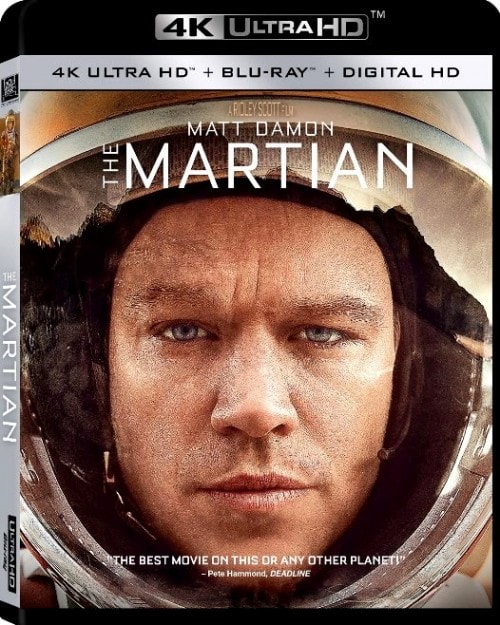 United States, United Kingdom Movies / Adventure 4K
Producer: Ridley Scott
Cast:Matt Damon, Jessica Chastain, Chiwetel Ejiofor, Kristen Wiig, Jeff Daniels, Michael Pea, Sean Bean, Kate Mara, Sebastian Stan, Aksel Hennie.
IMDB 8.00
File Size 50.07 GB
Film description
Taken from IMDB.COM
Martian mission "Ares-3" in the process of work was forced to urgently leave the planet because of an impending sandstorm. Engineer and biologist Mark Watney was damaged in a spacesuit during a sandstorm. Employees of the mission, considering it dead, were evacuated from the planet, leaving Mark alone.
Waking up, Watney discovers that there is no connection to the Earth, but the living module is fully functional. The protagonist begins to look for a way to hold out on existing supplies of food, vitamins, water and air for another 4 years before the arrival of the next mission, Ares-4.

[quote]DTS HDMA Track is OOS on this release with ~10 frames in the middle of the movie.
We will not be releasing a PROPER version of this REMUX. The Martian 2015 True HD 7.1
Converting the TrueHD Atmos to DTS HDMA is currently impossible without having OOS for the EXTENDED version of the 4k BluRay.