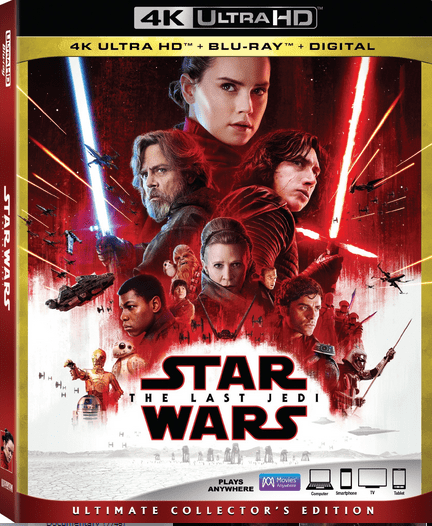 Star Wars Episode VIII - The Last Jedi 4K Review movie
Is the Last Jedi perfect? No, it's not. And if you're interested in dissecting it completely with the sole purpose of finding things "wrong" with it, while sipping from your glass of vinegar, you'll probably end up with a decent list by the time the credits roll.

There's at least one very cringeworthy joke. There are some dumb decisions being made solely to be able to advance the plot. You'll see some underused characters, unneeded character interactions, silly science, and more.

But who cares? It's not like even the original Star Wars movies didn't have their own lists of glaring issues. What's left is a movie that's entertaining from start to finish and has everything you'd want from Star Wars; battles in space and on the ground, interesting and exotic locations, a good story.

Visually it looks stunning and the musical score is amazing (much better than in The Force Awakens). Acting across the board is good.

I was never bored. The movie made me feel like I was part of a journey and that made it very easy to overlook the things I didn't like. All in all, It has me wanting more.