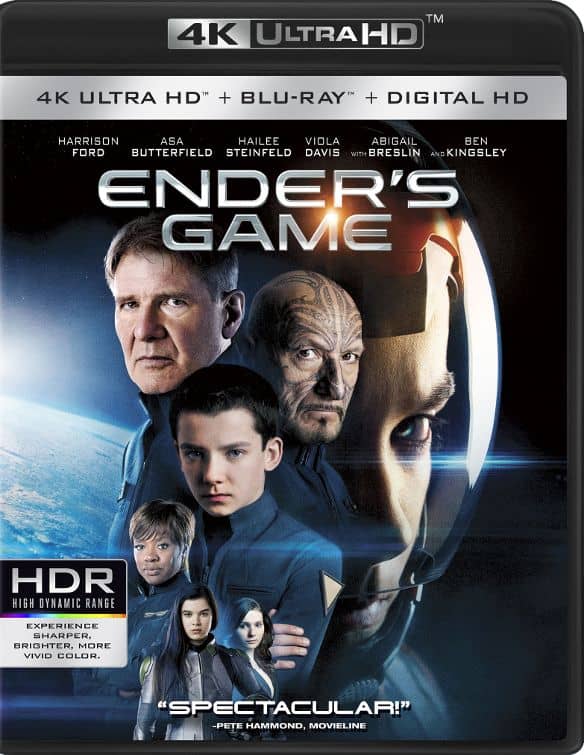 The Earth was ravaged by the Formics, an alien race seemingly determined to destroy humanity. Fifty years later, the people of Earth remain banded together to prevent their own annihilation from this technologically superior alien species. Ender Wiggin, a quiet but brilliant boy, may become the savior of the human race. He is separated from his beloved sister and his terrifying brother and brought to battle school in orbit around earth. He will be tested and honed into an empathetic killer who begins to despise what he does as he learns to fight in hopes of saving Earth and his family.

Review 4K
Ender's Game had a lot of work to do from the outset. The movie had to overcome years of development hell, a questionable production team and controversy surrounding the authors political ideals.

But despite all the odds, Ender's Game winds up as a very good movie that just barely misses on being a great one.

The story follows our hero Ender Wiggin, a newly recruited member of a battle school designed to train young people to prepare to war with a deadly alien force. Ender finds himself often alienated and must overcome incredible pressure from everywhere.

The story remains very faithful to Orson Scott Cards original novel, even small details that are not on surface crucial to the story are present, so its clear the film-makers did their best to make it as close to the book as they could. Only one major sub-plot about Ender's siblings back home on earth is omitted (which in my opinion was a wise choice, because taking the story away from battle school would have hurt the flow of the film).

The actors are great, Asa Butterfield absolutely owns the role of Ender Wiggin, effortlessly switching emotional gears when needed. Harrison Ford as Colonel Graff is clearly having a lot of fun in this movie, it's the liveliest the actor has been in years. Other supporters like Abigail Breslin, Hailee Steinfeld and Ben Kingsley also bring a lot of charisma to the screen and make even small roles memorable.

Perhaps the films biggest strength is its production design, the technical team did an outstanding job of bringing the environments of the battle school to life, the zero gravity combat scenes being some of the films biggest highlights.

It's not all perfect however, there is a little problem with some of the heavy exposition dumps in the film. Plus a couple of the actors (most notably Viola Davis) seem lost and don't know what kind of movie they're supposed to be doing.

The biggest problem with Ender's Game is the incredibly fast pace, which isn't an immediate issue, but a lot of story and character development suffers. We're barely 10 minutes into the movie before Ender is blasted off to battle school. All the back story about Ender and his family, his turbulent relationship with his older brother Peter and his delicate relationship with this sister Valentine, plus a lot of the history of the alien invasion are largely skimmed over and this lack of depth hurts the movie. This and also the fact that no-one seems to age throughout the film gives the impression that this whole thing is taking place in a very short amount of time, unlike the novel which took years.

But the whole time the film builds towards a really remarkable conclusion, one that when it come is both morose and uplifting. It's one of the most striking endings to a film like this in a long time.

Overall its a really good movie that I would highly recommend, it's far more that the Star Wars meets Hunger Games tag its been given by so many.