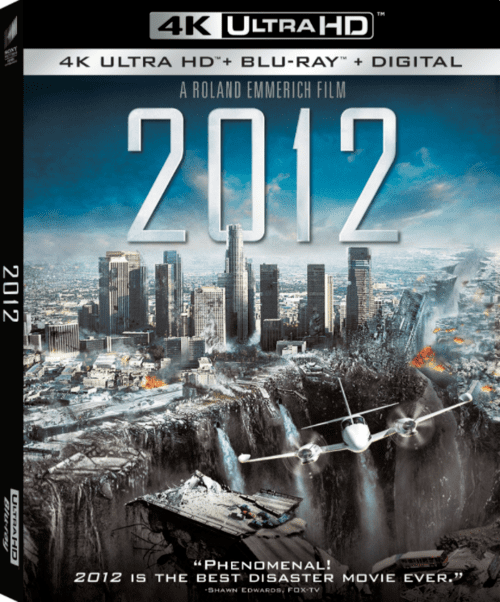 4k movies reviews
Do you know what Shiva, Ra and Emmerich have in common? These are the three most famous gods of destruction. Ra and Shiva are old gods, and Ronald Emmerich is a god of a new generation. Only he alone is able to destroy the Earth again and again so that every time everyone believes in what is happening. In "Independence Day" he destroyed the largest cities in the world, in "The Day After Tomorrow" he first flooded, and then froze, the entire northern hemisphere of the Earth. And then the day came when Ronald Emmerich made the underground plates move, and the continents, engulfed in an all-consuming flame, turn over and submerge under the water, leaving no one a chance for survival.

The plot of the film "2012" is based on the Mayan calendar, which ends in December 2012, on the day of the parade of the planets, the day when the apocalypse comes on Earth. The main character and his family are trying in every way to escape in the midst of a dying world. In doing so, they face various difficulties and various personalities. Among them are a Russian businessman with two sons, who took care of his salvation in advance, a crazy “DJ” who predicted the end of the world long before everyone knew about the impending apocalypse, and many more interesting people with their own stories. The film is full of hilarious jokes and just cool moments that make it especially attractive to any viewer.

The graphics and special effects are so cool and spectacular that it will take your breath away. That there is only a scene of arrival in a limousine through a city sinking into the ground. Collapsing roads, exploding cars, driving a limousine through a falling skyscraper. This episode alone fully pays for the cost of even the most expensive movie ticket. I'm not even talking about how spectacular the explosion of the supervolcano and the huge tsunami that covers the mountains look. It is useless to describe what you need to see. I just want to add that one of the most beautiful and spectacular moments is the takeoff of the An-500 aircraft (it will be built in the future) from the crumbling airfield in Las Vegas. Beauty, and nothing more.

The acre play is absolutely amazing. The main characters play very convincingly, while the minor ones live the lives of their characters. That is only a Russian businessman. His phrases, his actions and behavior are unambiguously Russian. And in general, the film came out interesting for you and me, because there are a lot of Russians in the film, even our president is present, who is very similar to the young and fit Brezhnev.

The bottom line is that 2012 was by far the most devastating film of the last decade, to say the least. 260 million spent on it are fully justified by the middle of the film. And if Roland Emmerich, as promised, will really make the series "2013", then "2012" may become not only the most expensive pilot episode of the series in the history of cinema, but also the most exciting, spectacular and cool. If you want to see how the Earth is collapsing, watch 2012. If you want to enjoy beautiful pictures and powerful special effects, see "2012". If you like quality acting, watch 2012. But if you want to get it all together, then definitely go to the cinema with the biggest screens in your city and watch 2012!